Just outside of Charlotte North Carolina, in Gastonia, John Zolidis opened his gym Old School Barbell Club in early 2020. John prides himself on catering to his power lifting members, but also enjoys working with those who are just beginning their fitness journey.

His fitness and weightlifting journey began in 1975 at Vince’s Gym in Cleveland Ohio. There at that 4th floor gym John grew into his love of fitness and lifting. As John grew in his fitness career, he competed in one national level Olympic Lifting Competition and four National Power Lifting Championships. In 1981 He finished 4th place at the YMCA nationals in the light-heavyweight class. Some of his personal bests in power lifting included a 645lb squat, 390lb bench press, and a 725lb deadlift all completed around 185lb bodyweight. Wally Grossman introduced John to  , where he completed a 264lb Split Snatch and a 325lb Split Clean and Jerk. He noted that the lift that he was most proud of was his 125lb Dumbbell Clean and Press for five repetitions.

John trained with numerous national and world champion powerlifters in Ohio, including Vince Anello, Dave Schneider, Tony Fratto, and even Olympic lifter Chuck Vinci. Several friendships were formed over the years with many people in the weightlifting community.

These friendships are still evident today as they were some of the driving forces behind John opening his own Old School gym. John felt that too many gyms were “all sizzle and no steak” but he wants to “give people the steak”. He wants to bring back the Old School way of weightlifting with simplified programs and hard work on the basics. John is always more than willing to provide his members with lifting tips and instruction at no extra charge. He noted that there is no secret program or quick path to success, it takes consistent hard work over months and years.

John was introduced to York Barbell while reading Muscular Development and Strength and Health magazines. He enjoyed that the magazines were filled from cover to cover with instructional material for weightlifting. John decided to outfit his gym in North Carolina with some of the equipment that he grew up reading about. Some of John’s favorite equipment from York Barbell include the Legacy Plates, EZ Curl Bar, and the Black Oxide Olympic Bar. 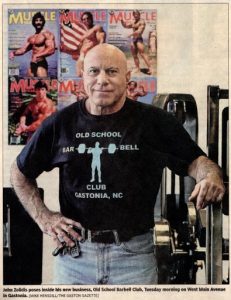