The third legend we are highlighting is 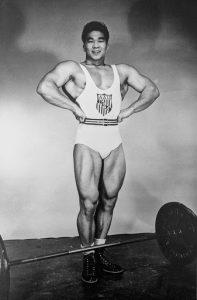 Tamio “Tommy” Kono. Tommy was born in Sacramento California in 1930. He was introduced to weightlifting at a young age when his family, of Japanese descent, were detained at a concentration camp at Thule Lake during World War II. Kono was considered one of the greatest weightlifters ever to compete for the United States. Tommy had the ability to adjust his body weight to compete in several weight divisions. Even though his body weight was fluctuating, he did not lose his performance ability. Kono’s legendary status as a lifter was earned through his skill in the Clean and Press, Clean and Jerk, and Snatch. His skill in these events eventually earned him three Olympic, eight World Weightlifting Championship, and three Pan-American Games medals. Kono was the first weightlifter to set world records in four different weight classes; lightweight, middle weight, light-heavyweight, and middle-heavyweight. In the 1950’s Kono went on to compete not only in weightlifting, but body building as well – winning the Mr. World and Mr. Universe titles in 1954, 55, 57, and 1961. Tommy’s legacy continues to live on through his inspiration to many of the biggest names in the fitness industry, including Arnold Schwarzenegger. Tommy Kono was inducted into the International Weightlifting Hall of Fame as well as the U.S Olympic Hall of Fame.

Some of Tamio “Tommy” Kono’s greatest achievements are highlighted below: 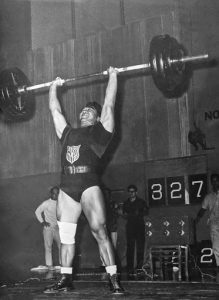 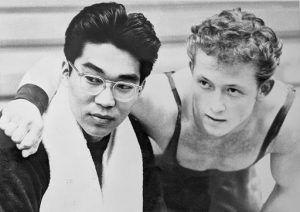