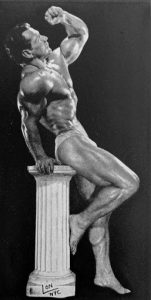 The second legend we are highlighting is John Grimek. John was born just outside of New York in Perth Amboy, New Jersey. He began lifting at a young age with his brother, George. John’s passion for training and physique eventually gained him the title of “The Monarch of Muscledom”. While not as well known for Olympic lifting as some of his colleagues, John was able to sharpen his talents and incredible strength to develop one of the best physiques ever known. Grimek’s winning career spanned a decade, during which he claimed the titles of York Perfect Man, Mr. America (twice), Most Muscular Man in America, Mr. Universe, and Mr. USA. One of the most impressive features of John was his muscular control, and balance. Able to balance his considerable body in all manner of positions, it was not uncommon for him to drop into a split, or a handstand during competitions. John worked for Strength and Health magazine as it’s associate editor and contributor, his incredible form gracing covers throughout the decades. Eventually retiring from York Barbell, John passed away in York, PA in 1998.

“They had a pose down between me, Reeves and a guy from France. We pulled straws to see who was going to go first. This Frenchman got first, so he went on. He didn’t do much just a couple of poses and that’s it. I went on second and went through a whole routine of about 30 poses. Then I did muscle control on top of that, and as a conclusion, I jumped off the pedestal into a full split, did a handstand, a couple of handstand pushups, and flipped back to my feet.”

Some of John Grimek’s greatest achievements are highlighted below: 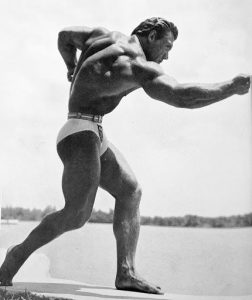 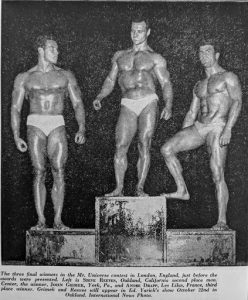