Throughout its 88 years in business, the York Barbell Company has manufactured various styles of exercise equipment. As the years went by, products evolved to meet the needs of each era. One product that evolved to meet the needs of its time period was the York Swing Bar Wartime Model. This product was manufactured during World War II. During that time manufacturing restrictions and material shortages were troubling businesses all over the country. While York Barbell Company’s products were not on the restricted list, it was noted that it would be “very patriotic” if York Barbell could find other materials to make products with. The York Swing Bar Wartime Model was made with noncritical items. This set gave York Barbell the chance to thrive during the war. This set was produced with composition plates. These plates weighed the same as cast iron plates but were larger and bulkier in size. The Swing Bar Wartime Model was a complete hit with York Barbell customers during the war. Surprisingly, not one customer reported any composition plates breaking during the shipping process or during use. These unique plates far exceeded the durability of their thinner counterpart the iron plate as they were noted to be “so strong, so tough, so durable, that they can be tossed around upon the concrete” and not break. The plates were a new adventure for York Barbell during World War II, but the swing bar was a revolutionary idea for that era. The exercises that could be done with the swing bar were numerous. It would provide the world of lifting a new look at exercises that could develop every part of the body. 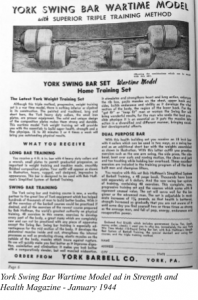 The York Swing Bar Wartime Model was made up of one 4’6” long bar, one 18” short bar, 60lbs of composition weights, several smaller plates, 8 heavy-duty collars, Bob Hoffman’s Simplified System of barbell training booklet, and the New Swing bar system of training booklet. The entire 110lb set was sold for $15.00 plus $1.00 for tax. The 18” bar in the set could be put together and used for swing training or as a single heavy dumbbell. The two 48-page booklets provided exercises and courses that could be done with the weights and bars in the set. Smaller plates came with the 10lb composition weights to allow for 1 1/4lb increases in weight on the bars.

Over 2000 sets were produced and shipped to customers. These customers provided nothing but a positive response during that time. The York Swing Bar Wartime Model was a necessity to make by York Barbell. They needed to create fitness equipment that would do well in times of restriction and shortage due to the war. The York Swing Bar Wartime Model was produced during the war, in order to accommodate to the times, but quickly became a part of the future of weightlifting. 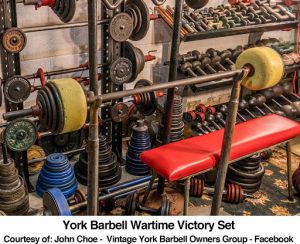