Some U.S Weightlifting champions were born strong and some achieve strength through tirelessly working at it. Not everyone can make it to the Olympics and get to call themselves an Olympian, but that doesn’t mean you can’t eat, train, and look like one if you want to! All you need is the willpower and the proper Olympic weights to make it happen.

Weightlifting is about showing what you can do and feeling great while doing it! At the 2020 Tokyo Olympics, The U.S. Olympic Weightlifting Team made history and had the strongest performance they’ve had in generations. Their accomplishments extended beyond the platform too in being one of the largest, most diverse, and most-decorated teams in U.S. history. The team consisted of four men and four women- the U.S.’s first gender-balanced team. Four of the U.S. athletes who competed in the Olympic Games Tokyo 2020 are IWF World Championships medalists.

According to TeamUSA.org, “ Seven of the eight U.S. lifters finished in the top nine of their body weight categories, with four placing in the top half of their fields. The last time the U.S. had seven athletes finish in the top-10 was 37 years ago at the Olympic Games Los Angeles 1984.” One of the weight lifters, Sarah Robles, is the second U.S. woman to compete at three Olympic Games. Do you know who is the only one with more appearances? York Barbell Club’s very own, Norbert Shemanksy! He has four Olympic appearances as a U.S. weightlifter amongst many other accomplishments.

To lift like one of the extraordinary athletes mentioned above, you’ll need some strong weight equipment! Depending on what you already have, you may just require a stand for your Olympic weights. Or, an Elite Olympic Training bar may be the addition you need for Olympic-style movements if you’re already equipped with a set of weight plates. To ensure all of your equipment is made from quality materials and is built to last, we recommend getting all of your equipment in the York Barbell Brand. 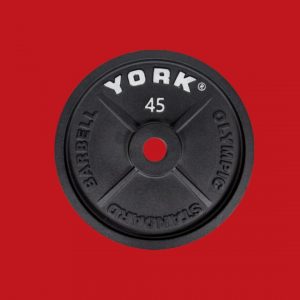 For those that need the whole package, and would need all of the essentials for starting to lift like an Olympian, then an Olympic weight set would be best for you. Additionally, you may want to purchase a stand if you don’t have proper flooring or walls that wouldn’t suffer damage from supporting weights. You can lift confidently with York equipment knowing that all of our Olympic products are calibrated to Olympic standards and are great for anyone looking to get into weightlifting competitions or achieve an Olympian physique.