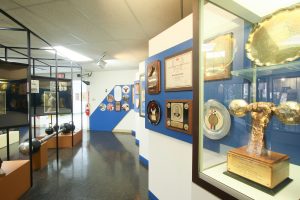 The strongmanism exhibit in the museum displays a variety of plaques, trophies, sculptures and vintage barbells from the strength era of the late 19th and early 20th centuries. Highlighting this exhibit is a statue of Louis Cyr, a 19th-century professional strongman, and his actual 220-pound stage dumbbell. At its heaviest, packed with metal pellets, it weighed 273 pounds. Cyr handled it easily one-handed, using the overhead “side press” style.

The feats of George ronald, George “The Russian Lion” Hackenschmidt, Hermann Gorner, Milo Steinborn, the Saxon and Osman trios, Bernard Macfadden, Charles Atlas, and Joseph Greenstein, the traveling Mighty Atom” who finished his act biting through nails”, are detailed beside the accomplishments of strongmen Sigmund Klein and George Jowett, whose respective famous gymnasium and physical culture books spread the word. 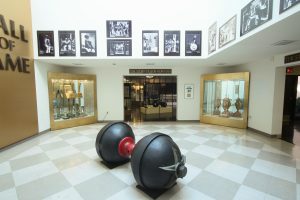 The centerpiece of the central, skylighted gallery of the Hall of Fame is the 7-foot Travis dumbbell weighing more than 1600 pounds, named for the man who made it famous, Warren Lincoln Travis. Travis weighed only 180 pounds at his zenith between 1906-1909, but his strongman exploits included lifting various weights up to more than 3,000 pounds in the harness, and back lifts of people and objects. The National Police Gazette recognized Travis in 1907 as the “strongest man in the world”, and his elaborate metal belt proclaiming this pronouncement is displayed in the museum. 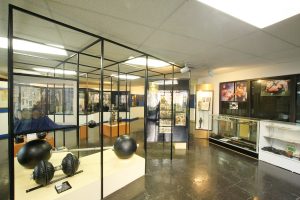 The fitness-strength sport of weightlifting was a part of gymnastics in the modern revival of the Olympic in 1896, with dumbbell and barbell lifts, and again in 1904. The sport was discontinued until 1920 when three barbell lifts were contested. A five-lift format was used in 1924, while 1928 marked the classic introduction of the press, snatch, and clean-and-jerk. This format lasted through the 1972 games in Munich, after which the 2-lift format of the snatch and clean-and-jerk became standard.

The brute-strength offshoot of strongmanism-powerlifting came into existence officially with the first nationals in 1964 in York, PA, and gained additional prestige with the first world championship in 1971, also held in York. Powerlifting, involving the squat, bench press, and deadlift, took less time than Olympic lifting to recognize female interest in the sport, with the first official women’s contest in 1978. the photo panels displayed top American and international powerlifters, as well as first official record lifts. Amazingly, some powerlifting careers span more than fifteen years of championships. 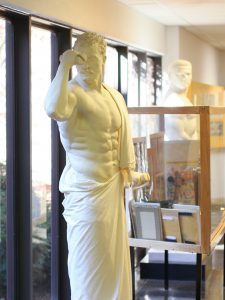 One of the historical pioneers of physical presentation is featured in the bodybuilding section of the Hall of Fame. A full-size body cast (reportedly one of the only two originals in existence) of Eugen Sandow, generally considered the recognized link between the traditional bulky strongman and today’s well-defined muscular bodybuilder, is prominently displayed. The extremely popular Sandow was so much an ever-present fixture on the European and American entertainment scenes that he captured the imagination of European monarchs, including England’s George V, who required Sandow’s exercise regimen as part of British army training. Later, Sandow was a regular performer in the Ziegfield Follies.

A life-size marble sculpture of John Grimek stands near Eugen Sandow. Grimek, a long time employee of York Barbell, was an Olympic weightlifter on the 1936 Olympic team, the only two-time Mr. America (1940 and 1941), the 1948 Mr. Universe, and the only competitor to retire undefeated in bodybuilding competition. John Grimek was generally recognized as the “Best Built Human” of the first half of the 20th century.

For more, visit the USA Weightlifting Hall of Fame in York, PA.